A book dedicated to lime, which for centuries has been fundamental in the evolutionary process of art and architecture, handed down since Roman times as an essential element of construction. In his treatises, Vitruvius describes it as dust that naturally produces wonderful effects.

From its narrative process we learn that lime is a geometrical yet intuitive substance. Its approach of spaces is simple and timeless, telling a tale that gets through to consciousness and the human dimension in its everyday environment. Its identity is built through a slow process, simultaneously defining its aesthetic spirit as something substantial. The white calcareous stone is cooked and freed from its weight, immersed in water and exposed to air, thus retaining composure and equilibrium. The result can be seen on the surfaces with their dense, porous and almost lightweight finishes. On them the fluidity of the mortar generates not only a peculiar movement but also a frequency that gives life to a rich texture, saturated with features such as strength, water resistance and compatibility to all things physical.

And when you sense that the wanted result has been achieved, that time is a space accessible only backwards, its aesthetics reveals another one of its potentials. Lime allows creativity to express itself in a realistic way, altering the material without losing touch with the simple natural process by which it is made.

Turning the whole sense of a visual experience into silent, exceptional unreality. A catalogue dedicated to lime as you see it in the paintings of De Chirico, in those metaphysical representations in which every illusory boundary seems to be there only to be transcended. Memories, and mental associations are created and deconstructed in dream realms or in the ancient space of Italian piazzas. Time is suspended and only matter remains as an increasingly rigorous and evasive presence.

Through imagination, the solidity of a lime-plastered wall regains its ancient magical connotation, while its elements, undertones, textures and nuances all act like connections leading to new synthesis and images. Upturned and abstract, reality remains suspended by a thread. Still part of a sensory perception but portrayed in a dreamy state, it clearly gets the characteristics of a reverie. 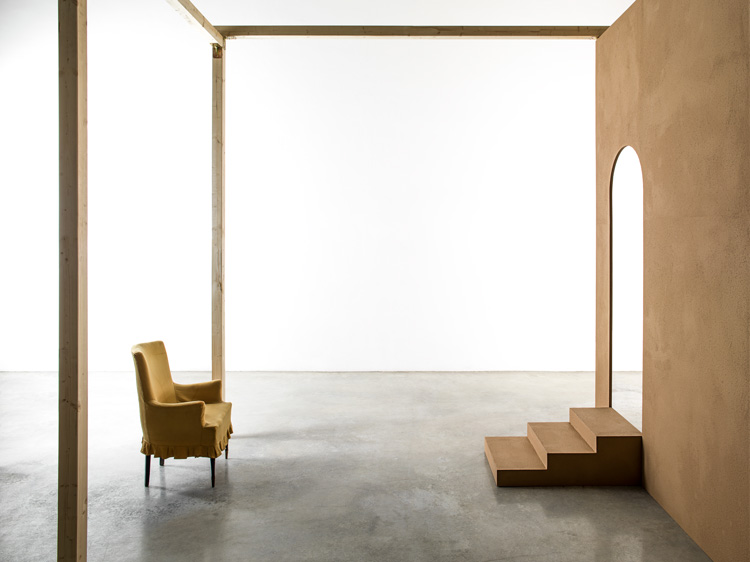